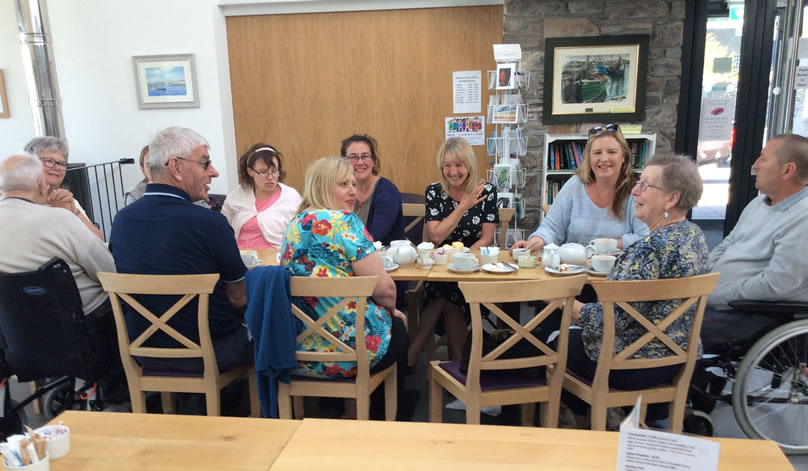 Service users, carers and Board members attended a coffee afternoon in St Ninian’s Tearoom, Isle of Whithorn on Thursday 17 May.  This proved to be an excellent and popular venue with beautiful views over the harbour.

Everyone enjoyed the chance to chat -and the delicious scones!

Many thanks to Wendy for organising the Bingo games and providing prizes!

Colin McCracken of the Care Inspectorate visited us on Saturday 17 March.

This inspection looked at two aspects of our work. Again this was a very successful inspection.

There were no requirements or recommendations for change made 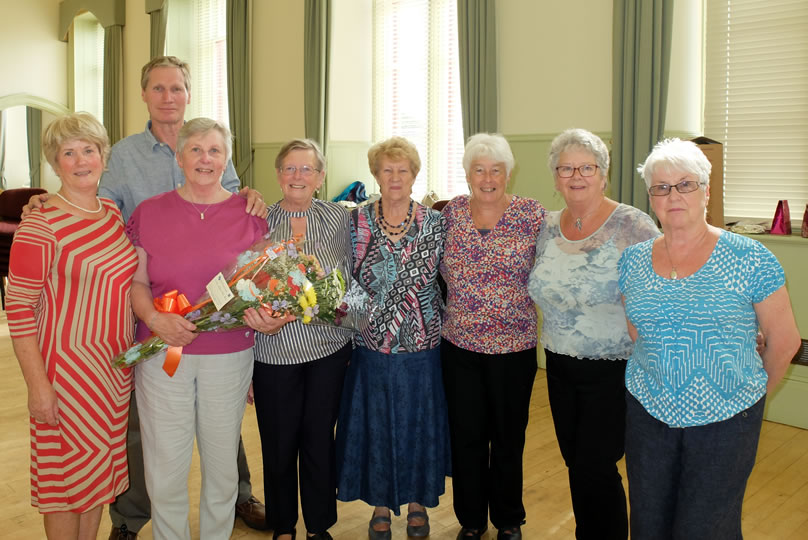 After almost 3 decades of dedicated service to Crossroads, our popular, long-serving manager Anne Gorman has taken a well earned retirement.

On August 3rd 2017, a large gathering of friends, colleagues, service users and carers packed Wigtown Town Hall to show their appreciation for all that she has done for Crossroads and the local community over that time.

However it’s not a complete farewell to Anne as she has agreed to join our board of directors, and hopefully she will continue her long association with Crossroads for many years to come.

A very enjoyable coffee afternoon, attended by service users, carers and Board members was held on Thursday 12 October at “The View” in Port William. This proved to be an excellent venue. The staff were very helpful and friendly – and the scones, fresh and delicious!

Congratulations to Becky Dalrymple, our Admin Assistant on her organisation of the event and her involvement with service users on the day.

The 2016 annual survey of service users was carried out in May. As in previous years, we were pleased to discover how highly our service users value the service, with an overall satisfaction rate of over 95% of those who returned completed questionnaires. All points raised by service users, their families and carers have been given careful consideration and acted upon by the manager and staff where appropriate, and once again, we appreciate the time and effort service users put in to complete the questionnaires and hope that they find the exercise worthwhile.  We certainly do, as it can highlight points which could otherwise be overlooked.
The full report is available as a PDF here.

Vera has long-standing connections with Wigtownshire.

She worked as a farm secretary for several years and left the area only because her mother was ill and needed her at home.  Also, her husband was from the Newton Stewart area, so it was a natural decision to move back here when they retired and he had fallen ill.

Vera also goes back a long way with Crossroads.  Initially, while living in Staffordshire she became the carer of her husband, and received 5 hours per week respite from the local Scheme.

After she and her husband returned to Newton Stewart, she was put in touch with Crossroads (Newton Stewart and Machars) Care Attendant Scheme by her GP, and received the same allocation of hours, which she was able to use flexibly – often as a block to enable her to go to Ayr or Dumfries.  Her husband enjoyed the visits of the care attendants and of our manager, Mrs Gorman, who became a family friend.

When her husband passed away, Vera wanted to give something back to Crossroads so she joined the management committee, later becoming a director of the Scheme.  She served for many years, bringing the carer’s perspective to the deliberations and decisions of the Board as well as being involved in a wide variety of roles from recruitment of staff to fund-raising.  Her input was invaluable.

After several joint replacement operations, the wheel has turned full circle and Crossroads is once again supporting Vera – this time to enable her to remain living in her own home.  When care was needed, she had no hesitation in asking for Crossroads and has nothing but praise for her care attendants and the management staff.

In order to cover the visits required, Vera was asked to accept a male care attendant.  She was a little reticent about this at first, but has found the arrangement perfectly satisfactory.  She says “All the care attendants are sensitive and willing to help in any way they can to do what is needed”.  She enjoys their company and looks forward to their visits.

What Service Users have said about Crossroads:

“When it comes to the carers that come into our flat we cannot praise them highly enough. If we knew what our carers were like we would have got Crossroads years ago.”
“The care has been superb - could not have wanted for better."
“Thank goodness for a service like Crossroads. Thank you Crossroads and carers for all your prompt and pleasant service.”
“The girls that come into our flat cannot be improved upon. They are so kind and compassionate."
I find the ladies coming in is good for my morale. Getting 2 showers weekly is really helpful as I could not do it myself"
“The excellent support is allowing us to stay in our own home for as long as possible.”